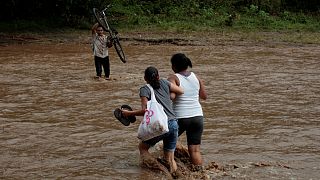 Through Monday, Nate is expected to produce 5 to 10 cm more rain in parts of El Salvador, Honduras and
Nicaragua, 5 to 10 cm in eastern Yucatan and western Cuba and 8 to 15 cms in the
U.S. central Gulf Coast.