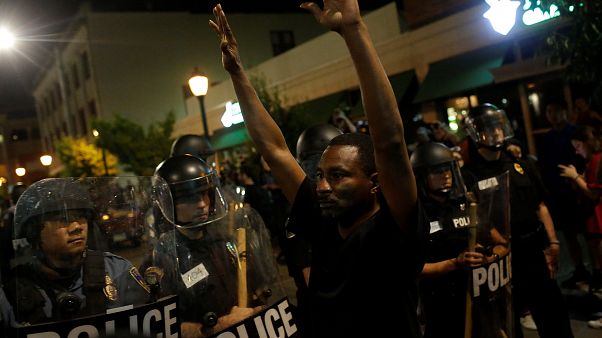 Several hundred demonstrators marched on Saturday (Sept. 16) through St. Louis to protest a police officer’s acquittal in the killing of a black man.

“The whole damn system is guilty as hell,” the protesters chanted, as well as “Hey, hey, ho, ho, these racist cops have got to go.”

This largely peaceful second day of protest rallies in St. Louis was however marred by clashes with riot police. Shop and restaurant windows were smashed, and demonstrators hurled trash cans at officers.

Some 33 people were arrested and 10 officers were hurt.

Rock band U2 canceled a concert scheduled for Saturday in St. Louis, and singer Ed Sheeran did the same for his show on Sunday, citing security concerns.

The verdict came about three years after rioting broke out in the St. Louis suburb of Ferguson, when a black teenager was shot dead by a white police officer, sparking nationwide soul-searching over police violence and racial discrimination.

Smith was shot five times in his car after attempting to elude Stockley and his partner, who had chased the suspect after an alleged drug deal, authorities said.

During the pursuit, Stockley could be heard saying on an internal police car video he was going to kill Smith, prosecutors said.

Stockley believed that Smith was armed, defense attorneys said, and a gun was found in the car.

Prosecutors argued Stockley planted the weapon and the gun had only Stockley’s DNA.

“This court, as a trier of fact, is simply not firmly convinced of defendant’s guilt,” Judge Wilson ruled.