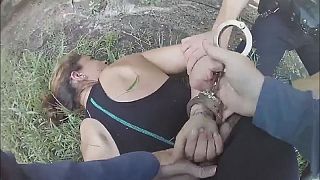 Police in Texas were forced to pursue one of their own vehicles through the city of Lufkin on Saturday after a suspected shoplifter escaped from her handcuffs, climbed into the front seat of the patrol car, and fled.

Multiple cameras, including bodycams and the stolen vehicle’s dashcam, showed Toscha Sponsler’s daring 23-minute escape attempt, which ended with her losing control of the vehicle and being rearrested.

Lufkin police say that during the chase, officers could see Sponsler reaching for a police shotgun which was mechanically locked to the vehicle.

Sponsler, who was reported to be in possession of methamphetamine, was charged with escape, causing serious bodily injury/threat with a deadly weapon, aggravated assault against a public servant, possession of a controlled substance, evading arrest with a vehicle with a previous conviction and unauthorised use of a vehicle.