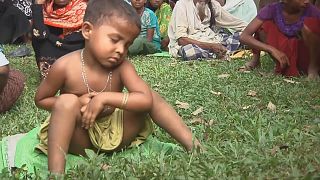 Camps in Bangladesh fill up with Rohingya refugees

With thousands of Rohingya refugees streaming daily across the swampy border into Bangladesh, one hospital was struggling on Monday to treat dozens of men who had arrived with broken bones, bullet wounds and horrific stories of death, reported the Associated Press.

Already, some 87,000 Rohingya Muslims have entered Bangladesh, fleeing violence in western Myanmar that erupted on August 25.

The refugees have filled three older refugee camps set up in the 1990s.