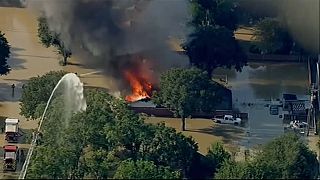 Firefighters in Houston are battling a blaze at a building still surrounded by Harvey’s floodwaters on the city’s west side.

Houston TV station KTRK reported on Saturday that firefighters were being hampered by burglar bars on windows around the building, which appears to be a multi-family dwelling.

Parts of west Houston are still inundated from the release of floodwater from nearby reservoirs that are designed to catch storm runoff.

Mayor Sylvester Turner on Friday said the ongoing release of water could keep thousands of homes flooded for up to 15 days. He told residents that if they stayed and later needed help, first responders’ resources could be further strained. Harvey dumped up to 50 inches of rain on the Houston-area after making landfall last week as a powerful hurricane.