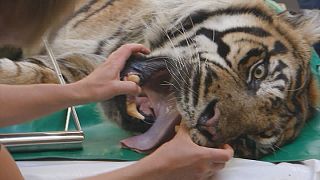 Smile for the camera as Danish tiger goes to the dentist

Yesterday a specialist dentist treated a male Sumatran tiger for a toothache in Aalborg Zoo, Denmark.

When you have to anaesthetise a 130-kilo-carnivore, you will have to use a lot of anaesthesia. So animal surgeon Trine Jensen has to make sure that she uses the right dose when the male tiger, Batu, is going to dreamland.

The 14-year-old has been dealing with a toothache for a long time. And now he is going to see the dentist.

“We know that if humans have the same problem they are in pain. So when you have an animal with that problem and the animal can’t fix it on its own, you have a responsibility,” said Kortegaard.

And it is becoming increasingly common in the zoos around Denmark to treat minor injuries like broken teeth, worn hooves and small veins.

“In the last six years the zoos around Denmark have hired increasing numbers of animal doctors and that has meant more injuries are discovered. The doctors are now able to intervene at an earlier stage than before if the animals are in pain and that has resulted in a higher level of animal welfare in the zoos,” says the chairman of the Animal Ethics Council in Denmark, Beng Holst.