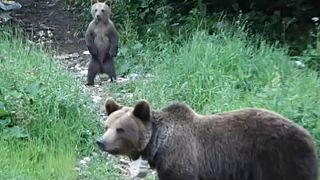 Tens of brown bears are descending into the mountains cities of Romania as to feed themselves from the trash cans. They want to find food and often they meet people in their way. Locals from Harghita and Prahova counties

Encounters with the bears are said to be becoming more common than ever. Some people enjoy the spectacle, but the bears are unpredictable and others worry that tragedy is imminent.

Most of the cases registered against the bears since early 2017 have been related to attacks on sheep (37), the rest being on cattle or other animals. Since the beginning of the year, seven people from Harghita county went to the hospital after being attacked by bears. Most of them were shepherds.

Hundreds of people gathered last month in front of environment ministry in Bucharest demanding they be allowed to kill brown bears in the interests of safety. The ministry responded by proposing a cull of 140 of the animals for limited cases, though the brown bear is a protected species in Romania.