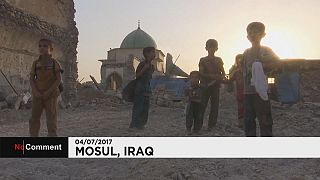 Al-Abadi spoke during a press conference in Baghdad on Tuesday, less than a week after he declared an end to Islamic State’s self-styled caliphate after Iraqi forces achieved an incremental triumph by retaking the landmark al-Nuri Mosque in the Old City.

His remarks come on the three-year anniversary of IS leader Abu Bakr al-Baghdadi’s sermon at the al-Nuri Mosque, from where he declared the caliphate.