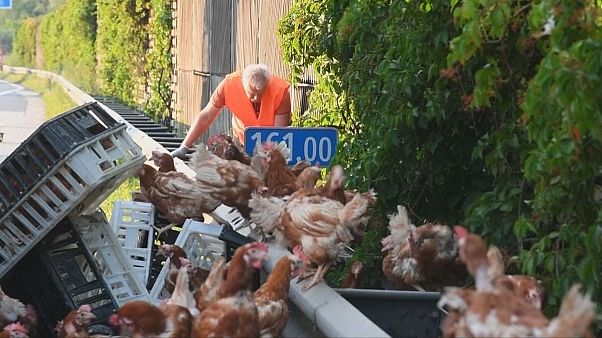 Thousands of chickens spilled from a crashed truck Tuesday (July 4) in western Austria, forcing an hours-long stoppage on the main A1 highway as firefighters chased the surviving birds and returned them to cages.

The accident happened early morning on the lane bound from Salzburg to Vienna, at Asten near Linz. The driver may have fallen asleep behind the wheel, police said. The man escaped injury and tested negative for alcohol.
The cargo part of the lorry split open on impact, spilling many coops with chickens along a 160-metre section of the highway. Thousands of birds survived the crash and found themselves free on the tarmac.

West-bound traffic was blocked during while around 100 firemen removed the debris and hunted chickens. A line of vehicles longer than 10 kilometres formed in the lane. The blockade was lifted after around five hours, at 10 am. Firefighters complained that drivers stranded on the highway failed to form a lane for, delaying their arrival at the scene. There were also problems in the opposite lane, as drivers slowed down to gawk, causing several minor accidents.