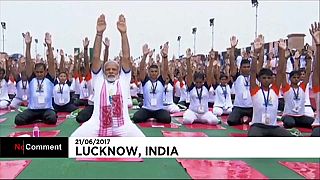 Thousands of people in Northern India rose at the crack of dawn on Tuesday morning to perform Yoga with Prime Minister Narendra Modi in Lucknow.

Participants were not deterred by scatter showers across the region and rolled out their yoga mats despite the rain, performing a coordinated mass display of yoga exercises to mark the third United Nations International Yoga Day.

Modi said: “Yoga that unifies the mind, body and soul, is now playing an important role in bringing the world together.”