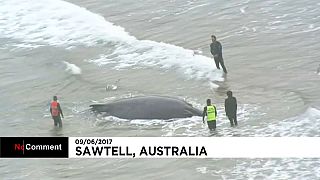 “It’s not that anything has gone wrong, it’s just the conditions have made it impossible for us to be able to affect a release of this animal through those surf conditions,” explained NSW National Parks and Wildlife Service Spokesperson Lawrence Orell.

“They’re just too extreme to either get a vessel in or indeed safe enough to put people in the water with the whale. So the decision has been made that given the interest of the animal needed to be taken into account, to end it’s suffering, it will be euthanised this afternoon,” Orell told Australia’s 7 News.