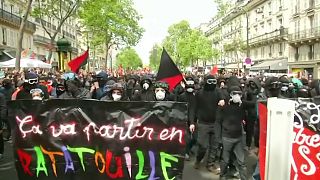 May Day in Paris

Less than a week before the decisive second round in France’s presidential election, thousands of people took part in the traditional May Day rally in central Paris.

Monday’s demonstration was mostly peaceful but some protesters, many of whom were masked, clashed with police along the four kilometre route.

France goes to the polls on Sunday, May 7, to choose its next president and many of the banners and posters were related to the election.