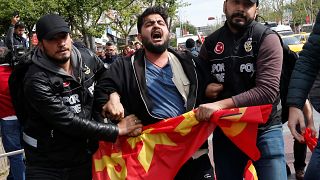 Turkish police arrested dozens as anti-government protesters tried to breach a ban on access to the main Taksim Square in Istanbul to mark May Day.

Security was tight across Turkey’s biggest city, with more than 30,000 members of the security forces deployed to deal with May Day celebrations, according to the Istanbul governor’s office.

Taksim Square was the home of May Day celebrations until 1977, when dozens of people were killed during demonstrations, which were dubbed the “bloody May Day”.

The square was reopened for celebrations in the late 2000s but was shut again in 2013.

The main rallying point for this year’s celebrations is Bakirkoy neighbourhood where tens of thousands of people are expected to demonstrate.