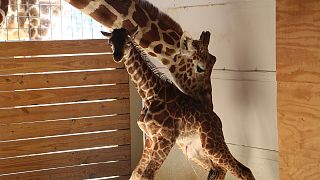 After weeks of suspense, April the giraffe finally gave birth to a baby boy on Saturday (April 15), delighting hundreds of thousands of people who have been monitoring a live cam feed from a New York zoo in anticipation of the long-overdue event.

More than a million people witnessed the birth on the zoo’s livestream.

The YouTube page showed April going into labor and the hooves of the baby first emerging from the standing mother.