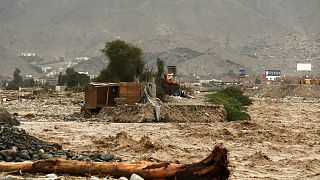 The number of people killed in Peru following intense rains and mudslides has climbed to 72.

Thousands more have been displaced after their homes were destroyed by the flooding.

Across the country overflowing rivers have caused bridges to collapse and paralysed countless roadways.

The storms are being blamed on the El Nino weather pattern. That has prompted unusually high temperatures in the Pacific. The weather is expected to continue for at least another two weeks.