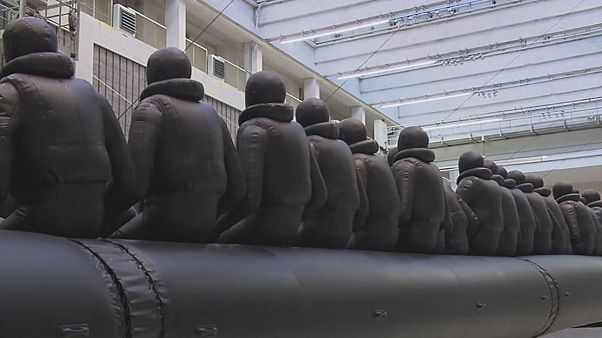 Ai Weiwei is installing in Prague a giant refugee boat

Chinese conceptual artist and political activist Ai Weiwei has prepared his so far biggest work of art, a giant refugee boat entitled “The Law of the Journey,” for the National Gallery (NG) in Prague.

The artifact will be displayed in the grand hall of the NG premises in the Veletrzni palace where its installation is being completed today.
A 70-metre-long inflatable boat with above life-size figures of 258 refugees of some dark material will hang in the air in the hall, accompanied by a big glass ball in which the artifact will be reflected.
National Gallery says this is the culmination of the artist’s interest in the global refugee crisis.
The official opening of Ai Weiwei’s exhibition is Thursday evening (March 16) and the installation can be seen in Prague until January 7, 2018.
The author says the artifact was inspired by his experience from Lesbos where a half-sunken boat was found. He wanted to be left alone there to feel how the refugees must have felt. He found a baby bottle and the Bible in the boat, he said.
By his giant artifact, Ai Weiwei wants not only to confront viewers with an extremely difficult situation of human beings at large, but also to point to the fact that the migrant crisis is dividing modern society into “we” and “they,” the curators said.