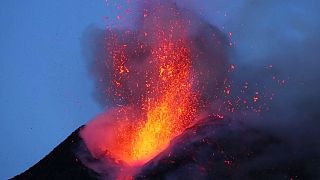 According to Italy’s National Institute of Geophysics and Vulcanology, the eruptions don’t currently present a danger to people or property. The nearby Catania airport has not been affected and remains fully operational.

Mount Etna is believed to have the longest recorded history of eruptions in the world. Its first eruption was observed and registered in 425 B.C.

The last time lava flows endangered nearby villages was in 1992 when the town of Zafferana was in danger of being overrun. The flows stopped only 850 metres (2788 feet) away from the town.