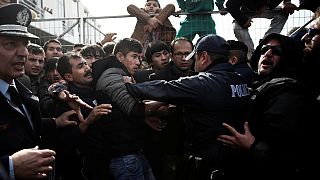 Greece’s migration minister Yannis Mouzalas was confronted by an angry crowd at the entrance of a sprawling migrant camp in the south of Athens on Monday, trying to block his entrance to the site.

Police swarmed around the minister as he was surrounded by dozens of demonstrators at the Hellenikon camp, located at a disused airport that also includes sporting venues built for the 2004 Athens Olympics.

The protest was organised against conditions at the camp.