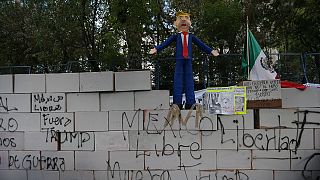 Demonstrators in Mexico City build a wall outside the US embassy

Protesters in Mexico City used boxes to build a makeshift wall outside the US embassy on Friday (January 20) to protest against plans by US President Donald Trump to build a border wall.

He has vowed to move fast on construction which he claims its southern neighbour will pay for.

More than three quarters of Mexicans have a bad or very bad opinion of the U.S. President, according to a poll of 600 people conducted earlier this month by Gabinete de Comunicacion Estrategica.