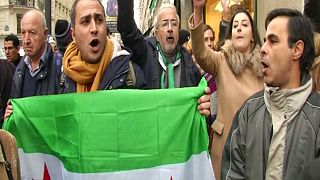 Demonstration for Aleppo in Paris

Some 50 demonstrators gathered outside the presidential palace in Paris, calling for an immediate ceasefire in eastern Aleppo and humanitarian relief access for the population.

Protesters called on Western powers to intervene to stop the bloodshed in what used to be Syria’s commercial capital.