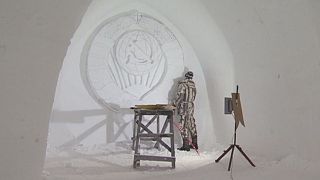 Russia’s seasonal Snow Village in the northern town of Kirovsk has sprung up again this year, ahead of its official opening on December 25th.

Organisers have refused to give away the theme of this year’s event, but some of the work already in place, such as a bear playing the balalaika, appear to suggest that ‘Russia in the eye of the foreigner’ may be a unifying concept.

The village will be officially open to visitors from December 25th and runs until April.