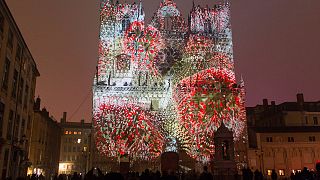 Thousands of people have attended Lyon’s famous Festival of Lights amid high security.

Last year, the show was cancelled in the wake of the November 13 Paris attacks.

The festival usually lasts for four days but this year it will only run for three, and will be policed by 750 gendarmes, military and security personnel.

The town council has also chosen to restrict the event to the city centre this year — in the Presqu’Ile area, between the Rhone and the Saone rivers — and between Old Lyon and the ancient theatre of Fourviere. The Festival of Lights usually takes place in the nine districts of the city.