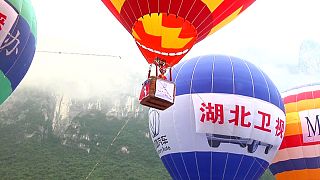 Fifteen hot air balloons took to the sky in a mountain valley in central China on Friday.

For those wanting to keep their feet on solid ground, a hot air balloon is not the only way to see the valley.

A new escalator has been installed in Enshi city to allow visitors with a fear of flying the opportunity to see the canyon for themselves.