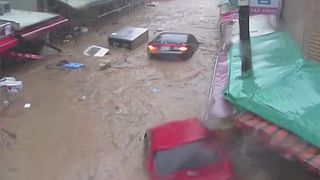 A 60-year-old man was swept away by the fast flowing waters and died, and one rescue worker is reported to be missing.

Streets and vehicles were flooded, walls collapsed and houses were swept away.