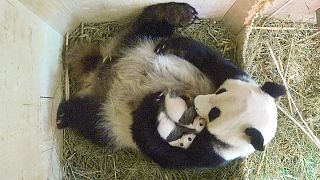 It is official! After a month of speculation, it has now been confirmed that the twin baby pandas born at an Austrian zoo are a male and female.

The director of Schönbrunn Zoo in Vienna said photos of the cubs have shown for the first time “that they are a boy and a girl”.

She said on Tuesday that the fact that one of the twins is female is particularly welcome as all three cubs born previously were males.

Vietnam incense village dazzles ahead of Lunar New Year, though sales down