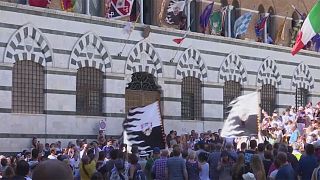 Held for the first time in 1482, the Palio remains a deeply-rooted and heartfelt race among the Siena neighbourhoods.

Ten horses race around the medieval Piazza del Campo, the main square of Siena. The city is divided into 17 small areas or districts, called “contrade”, competing against one another to win the horse race.

Each contrada has its own flag, songs and traditions.