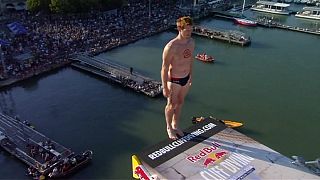 The world’s top professional cliff divers challenged themselves in a thrilling competition on the fourth stage of the 2016 World Series at La Rochelle in France on Saturday (July 23).

Britain’s Gary Hunt produced a stunning comeback to win the stage, impressing spectators with two of the hardest dives in the world.

Hunt, 32, was trailing in 12th place after two rounds.