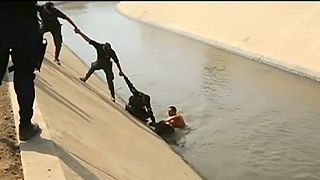 Peruvian police officers in the northern municipality of Trujillo, some 490 kilometres from Lima, have rescued a dog that found itself stranded in a canal.
One of the police officers tried to swim towards the animal while his colleagues formed a human chain down the canal bank in an effort to save the dog.
After several failed attempts, the police officer in the water grabbed the dog and handed it to the first in line of the human chain. The dog was pulled to safety.