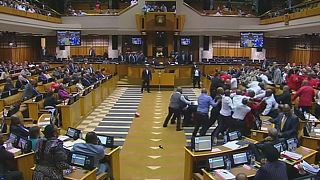 Members of the ultra-left Economic Freedom Fighters (EFF) party clashed with security guards, with some politicians being ejected.

The EFF argued Zuma was not fit to address the house because ‘he had failed to uphold, defend and protect the constitution’.