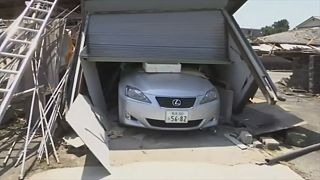 The aftermath of Japan's deadly earthquake

Flattened houses and rubble were scattered in southern Japan on Friday, a day after a magnitude 6.5 earthquake hit, killing at least nine people.

More than 800 were injured.

About 44,000 people in the region sought refuge due to the quake, though some returned home in the morning, reported Reuters.