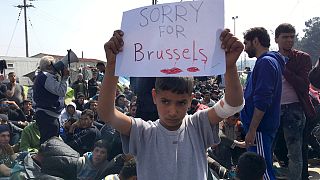 Dozens of migrants held a protest at the Greek-Macedonian border on Tuesday against the closed borders in Europe. More than 12,000 people have been camping on Greece’s border with The Former Yugoslav Republic of Macedonia.

Migrants and refugees in the camp express sympathy for the victims of attacks in Brussels and say they hope the bombings will not have a negative impact on their hopes to reach other European countries.