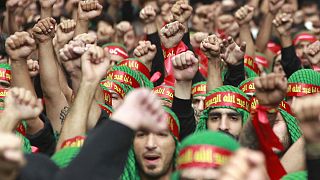 The day of mourning: Ashura

Thousands of Hezbollah supporters and Shi’ite Muslims took to the streets of Lebanon on Saturday to mark the anniversary of the death of Imam Hussein, the grandson of Islam’s Prophet Muhammad.

On the day of ‘mourning’, known as Ashoura, groups of men and boys perform a traditional flagellation ritual. Dressed in black, Hezbollah supporters marched in the streets of Beirut Southern Suburb beating their chests and chanting slogans.

Shi’ite mourners in the southern town of Nabatiyeh also practiced the Ashoura ritual of bloodletting with some receiving treatment from waiting paramedics. Ashoura commemorates Imam Hussein’s death in the battle of Karbala in 680 AD, during the struggle for control of Islam following the death of the Prophet Mohammed.