When the crew of Solar Impulse 2 were forced to suspend their effort to complete the first solar-powered aerial circumnavigation of the globe, the news was a blow but not a disaster for the team behind the project.

Firstly because the aircraft had already set a raft of records, and not only for renewable flight- for example achieiving the world’s lengthiest solo flight of 4 days, 21 hours, and 52 minutes. But secondly because the voyage around the world was never meant to be the ultimate success of the mission. The goal was much, much bigger.

The SI2 plane is the first solar aircraft to efficiently store energy, allowing for an uninterrupted journey. Funded by, and headquartered in, Monaco, it was conceived to show that environmentally-friendly technologies don’t need to be inferior technologies.

The work to integrate innovations from the technologies behind the structure, power and propulsion systems into the real world are already under way. 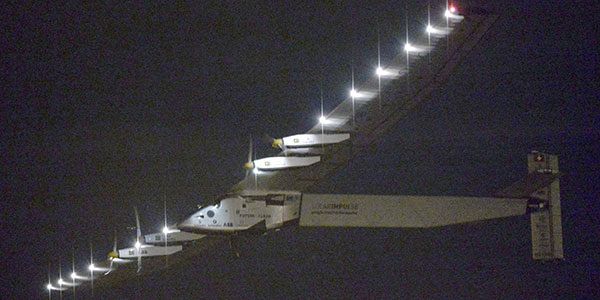 Expert in solar applications at Imperial College in London – Christopher Emmott also believes the work can have an impact even faster.“I think a project like this is really there to inspire people, and advertise the sponsors. It’s a pretty impressive achievement and shows off how powerful solar energy can be. And it’s also a very sexy project, which is easy to attract media attention and is the kind of thing engineering firms like to use to help their branding”.

One of the biggest challenges around solar energy is the batteries needed to store power when the sun shines and deliver it whenever required. Progress in this area can bring obvious benefits in every-day applications.

Emmott states “they’re increasingly needing better, more high power, low weight batteries, for electric cars, bikes, buses etc, but also mobile phones/laptops etc. But I think the biggest demand will start to come as solar power gets cheaper and it becomes economic to put batteries in your home when you put solar panels on your roof (something which currently isn’t done much). This could lead to a bit of a revolution, where people stop using energy from the national grid, but will create a huge demand for batteries, potentially similar to those used in solar aircraft today”.

Head of the Solvay Solar Impulse Partnership, Claude Michel, thinks Solar Impulse is first and foremost a Demonstrator – “The objective being to demonstrate what we can do with the alternative energies today thanks to the technologies developed on board and to transfer them on the ground in a multitude of other applications, our houses with thermal insulation, our car with lightweight components and an electric, hydrogen or hybrid power chain”.

This is where he says the project gains its real value.

Michel says this plane is not designed to carry freight or passengers, it is designed to carry a message “ if we can fly around the world with an aircraft powered only with solar power, no one can say anymore that these alternative energies have no value. Just do it now!” 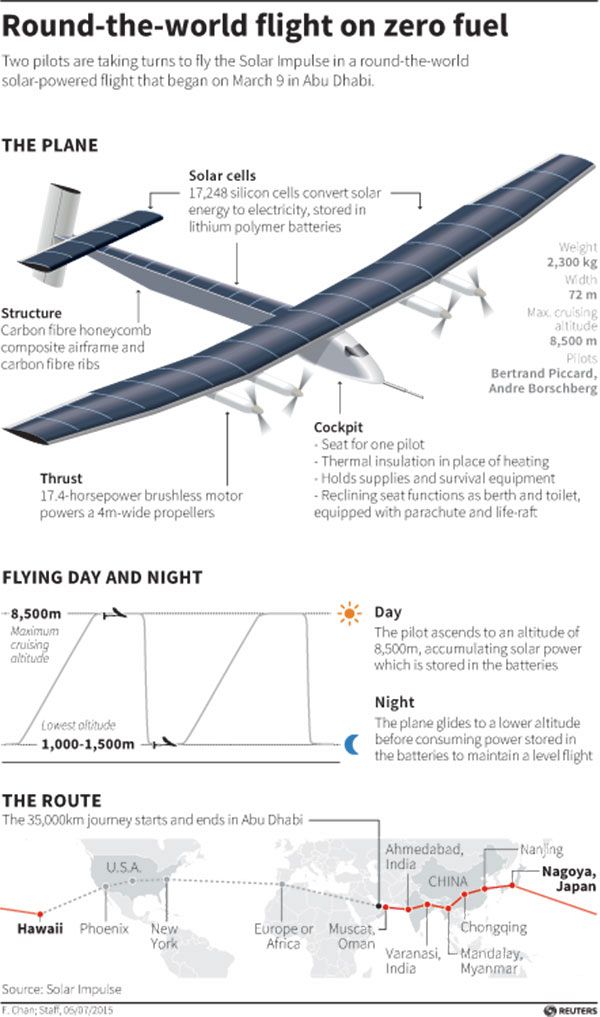 Further, obvious, applications of the technology used to power Solar Impulse could be in the development of drones. One day such unmanned aircraft could save the energy needed to blast a satellite into space by providing lower-cost services such as supplying internet access in remote locations or for aerial imaging for maps or environmental monitoring.

Chairman of IDTechEx, Dr Peter Harrop thinks the first solar-powered commercial aircraft could be built within five years however it will be nominal- “there will a very small role for next ten years for solar power in commercial flight. After that maybe a few percent of commercial planes – carrying only a few people. I include planes charged by their solar hangar”

Harrop goes on to say solar technology can be used for other transport including the Immortus concept car built in Australia. Several Energy Independent commercial vehicles are already on sale such as a small tourist bus China and others will be available soon- the British CargoTrike (an ultra-lightweight electric-assist pedal tricycle, designed for cutting through the traffic and delivering goods).

SI2 was certainly not built to carry passengers, on the other hand to convey a message… to meet emissions reductions targets and fulfill the promise of innovative solar research and technology development.