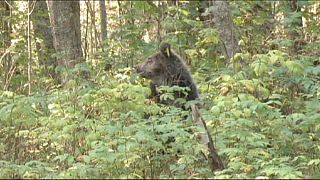 Orphaned bear cubs returned to the wild in Russia

Young bears in Russia are released into their natural habitat after being raised by volunteers.

The International Fund for Animal Welfare, which say it has successfully returned more than 200 bears to the wild, say hunting and deforestation is forcing the animals from their habitat at an “alarming rate”: http://www.ifaw.org/united-states/our-work/animal-rescue/saving-brown-bears-russia.