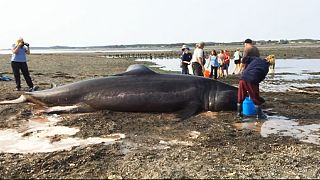 A large basking shark died after it was washed ashore in Lubec, Maine. The shark measured 30 feet long, according to local reports. The group of at least ten people spent several hours gathering water in buckets and poured it over the shark’s gills in an attempt to keep it alive after is washed ashore.