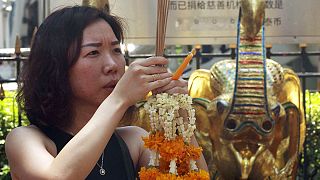 Residents and tourists in Bangkok flocked to the reopened Erawan Shrine to pray for the victims of Monday’s blast that rocked Thailand’s capital Bangkok. The explosion at Erawan Shrine, a popular tourist destination which has now re-opened, was followed by a second blast at a busy pier on Tuesday in which no-one was hurt.