On July 14, 2015, NASA’s New Horizons space probe will fly past the dwarf planet Pluto for the first ever close-up view of this frozen world on the edge of our solar system. Here’s what you need to know:

Is Pluto a planet or not?

Pluto isn’t a proper planet, it’s a dwarf planet. The reason for its demotion in 2006 from planet to minor or dwarf planet is not its size, although it is small, about a third the size of our Moon. What Pluto lacks is a clear orbital path, free of other objects. It is one of the largest objects in the Kuiper belt, a vast area of the outer solar system where frozen asteroids circle the Sun at a great distance. Pluto’s largest moon, Charon, is about half as big as Pluto.

Have we been to Pluto before?

This is the first time that a spacecraft has flown close to Pluto. The New Horizons mission is a pioneer, visiting this planet for the first time in much the same way that the Mariner and Voyager missions of the 1960s and 1970s showed us the other planets up close for the first time. Pluto is 7.5 billion kilometres away, and New Horizons took nine years to reach it, despite being launched on the most powerful rocket NASA had available.

In all probability, there’s no form of life on Pluto, but if you were to be there it would be cold and dark. Temperatures are around minus 223 degrees Centigrade, and the thin atmosphere is thought to have winds of up to 360 km/h. The Sun would look about as big as Jupiter does to us from Earth, but brighter. The surroundings would likely be made from icy methane, and a lot of the surface is a kind of reddish brown, because it’s covered in complex chemical compounds called tholins. 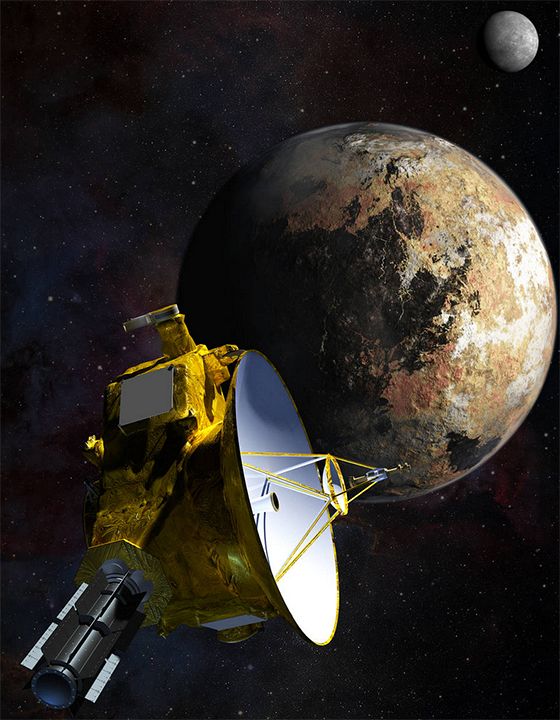 What do we expect from the New Horizons mission?

All exploratory space missions bring a wealth of data and a few surprises. New Horizons will take around 300 observations during the few hours it has as it flies past Pluto at 50,000km/h. It will take photos and measure the planet with spectrometers, allowing scientists to see the composition of the planet surface in unprecedented detail. We’ll find out how the colour of Pluto varies, what the atmosphere is like and whether it has mountains, ice caps, or other perhaps some entirely new features nobody had predicted. This is a truly pioneering mission.

What could go wrong?

New Horizons has already had a spot of bother when it went into ‘safe mode’ on July 4. The team quickly recovered the spacecraft, and it is now primed and ready for its most important moment of science. However the spacecraft navigation team will be keeping a close eye out for potentially hazardous objects in the vicinity of the spacecraft, in case there are small asteroids and pieces of ancient icy solar system debris lurking in the cold dark of space, waiting to slam a visiting spacecraft right where it hurts, in the antenna.

Why should I care about Pluto?

The mission is a landmark, the first visitor to the only remaining unexplored solar system object that everyone has heard of. No humans will be visiting Pluto anytime soon, it is simply too far away and too inhospitable for us to want to even try to go there. But Pluto is important for understanding the formation of the solar system, and like ESA’s Rosetta mission to a comet, the information New Horizons gathers will offer a few more pieces in the puzzle of how and why we all ended up here on this pale blue dot called Earth in the first place.