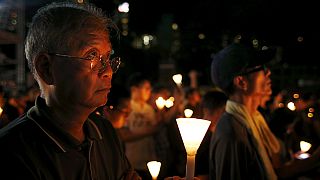 Tens of thousands of people gathered in Hong Kong on Thursday (June 4) for a candlelight vigil on the anniversary of the 1989 Tiananmen Square pro-democracy protests.

Hundreds of civilians are thought to have died in the demonstrations 26 years ago, after the Chinese government launched a crackdown.

Beijing has never revealed how many people died.