The enduring image of Luke Skywalker staring at two suns on his planet of Tatooine in the film Star Wars resonates with many.

Scientists now believe that many Earth-like bodies with two suns may exist and could be widespread, according to a report in the Telegraph.

“Tatooine sunsets may be common after all,” concludes the study by astrophysicists Ben Bromley of the University of Utah and Scott Kenyon of the Smithsonian Astrophysical Observatory.

Planets like earth are formed when asteroid-sized rocks get caught in the gravity of a star and clump together. It was always thought that the gravitational pull of two stars would create uneven orbits. 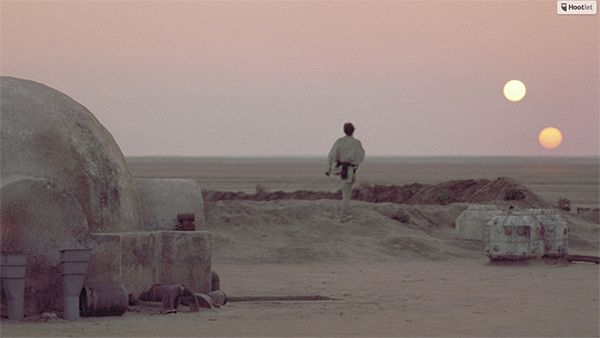 “For over a decade, astrophysicists believed that planets like Earth could not form around most binary stars, at least not close enough to support life,” he says.

“The problem is that planetesimals (asteroid-size rocks) need to merge gently together to grow. Around a single star, planetesimals tend to follow circular paths – concentric rings that do not cross. If planetesimals do approach each other, they can merge together gently.”

But if planetesimals orbit a pair of stars, “their paths get mixed up by the to-and-fro pull of the binary stars,” Bromley says.

“Their orbits can get so tangled that they cross each other’s paths at high speeds, dooming them to destructive collisions, not growth.”

However new calculations have now revealed that rocky, Earth-size planets can form around binary stars if they have a mostly circular orbit, the article said.

Although the researchers did not conduct their simulations to the point of planet formation, they showed that rocks could survive without collisions for tens of thousands of years in concentric, oval-shaped orbits around binary stars.

Tatooine is the home planet of both Luke and Anakin Skywalker and was once ruled by Jabba the Hutt. It was heated by two suns, Tatoo 1 and Tatoo II leaving humans to live in underground dwellings