On November 7, parts of the Mediterranean witnessed something not seen to often in those parts: a cyclone. Malta-based storm-chaser and weather enthusiast Andrea Muscat sent us these photos that show the power and the beauty of such meteorological phenomena, and explains the natural processes behind them.

Mediterranean cyclones are a very rare meteorological phenomenon. The majority form over two regions: the first encompasses an area of the western Mediterranean bordered by the Balearic Islands, southern France, and the shorelines of Corsica and Sardinia; the second is in the Ionian Sea encompassing the region between Sicily and Greece and as far south as Libya. The mountainous topography of the region, its closed nature and predominantly dry air are great limiting factors. However, these are occasionally overcome. Although they form at any given time of the year they are more common from autumn through to early spring.

Unlike their tropical counterparts, Mediterranean cyclones require somewhat different factors to form such as sea surface temperatures below 26°C and an influx of colder air to induce the necessary atmospheric instability and a warm and moist air mass. The atmosphere above the Mediterranean is baroclinic (large areas with significant temperature and pressure differences) unlike in lower latitudes where the atmosphere is barotropic (lack of significant temperature and pressure differences). Instability in the Mediterranean is therefore initiated by the coming together of different air masses while in tropical regions instability depends on the rising of an air mass as a result of a warm sea surface. However, the Mediterranean sea is warm when compared to other regions in the world and this helps in fuelling this region’s cyclones through convection. Similar to tropical cyclones, Mediterranean cyclones require minimal wind shear (a difference in wind speed and direction over a short atmospheric distance) and abundant levels of moisture and vorticity (rotation of a part of the atmosphere). Since the Mediterranean is a dry environment; the required abundant moisture required is often transferred to the region by a low pressure system, jet streams or Rossby waves. Therefore, Mediterranean cyclones often develop from an existing low pressure system. The minimum wind shear is often achieved by a vertical shift of air in the troposphere. This results in a rapid decrease in its temperature. This saturates the air, as cooler air has a lower moisture capacity. Moist air prevents vertical movement of air in the atmosphere and in turn leads to minimal wind shear. 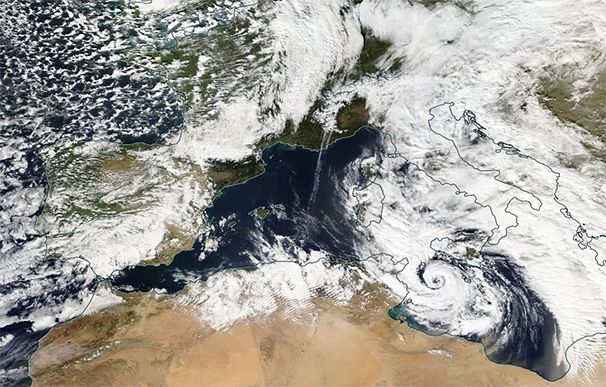 Mediterranean cyclones are generally small in size and may last from just a few hours to not more than a week. Most develop an ‘eye’ for a few hours and generally feature maximum sustained wind speeds of up to 150 km/h. On a satellite image they show as asymmetric systems with a distinct round eye encircled by atmospheric convection. The weak rotation of the storm is also seen on satellite images.

The Mediterranean cyclone that formed early on November 7 and lasted till early the following day was the first since March 2012. A strong low level jet-stream blew warm air masses from the Sahara desert towards the Mediterranean. These mixed with substantial moisture associated with a persistent area of low pressure that had produced showers and thunderstorms in the area for fifteen consecutive days. The already unstable, newly-formed air mass was then forced to rise by an incoming mid-lattitude depression from the north-west. It interacted with the vorticity of the centre of the depression while over Pantelleria and the Mediterranean cyclone started to develop. Within 24 hours, the storm followed a path all the way from Pantelleria to Lampedusa e Linosa, Malta, the south-east and east of Sicily and finally towards the open Ionian Sea. At its peak, the storm had a pressure of 978hPa at its centre, winds of up to 154km/hour and driving precipitation. The storm system also acted as a funnel that sucked sand from Libya towards the central Mediterranean where it manifested itself as a ‘sandstorm’ before being deposited with the rain. The storm possessed numerous characteristics seen in tropical cyclones including the characteristic spiral appearance, an ‘eye’, rapid atmospheric pressure decreases in advance of landfall and intense sustained winds and heavy rain concentrated in the eye wall.

The Mediterranean cyclone affected Malta from early on November 7 till early on November 8. As the cyclone made its way towards Malta, the islands were affected by bands of convection surrounding the storm’s centre. These produced heavy rain and thunderstorms. Some of the thunderstorms were very strong with severe gusts, moderate to large hail (up to 2cm in diameter) and funnel events. The cyclone made landfall at 15:50. As the ‘eye’ approached from the south west, the stormy weather intensified with a severe wind from the south-east (sustained at up to Force 10/11) and heavy to torrential precipitation. The storm generated waves of up to 7.1 metres and a storm surge. The ‘eye’ passed over the south of Malta with calm weather for some 15 minutes (between 17:04 and 17:19). Due to its small size, this break in the stormy weather was not experienced in all areas of the nation. The second part of the storm was even more intense. It was characterized by a severe wind from the north-west wind (sustained at up to Force 11/12) and more driving rain. The last part of the ‘eye’ moved off the islands at 18:04. The final band of convection hit the islands bringing further heavy rain and thunderstorms that lasted till early on the 8th.

According to weather stations, some 70 mm of rain (usually the average for the whole month of November) was measured in less than 24 hours in the worst hit areas. The cyclone forced the suspension of the Gozo-Malta ferry service, operations at Malta International Airport and the Malta Freeport, while producing substantial damage. The damage included uprooted trees, collapsed walls and downed powerlines. The latter caused lengthy power-cuts in some areas. A number of areas suffered extensive flooding high enough to carry cars in some areas. The very high waves and storm surge caused great damage to coastal resorts, leading to a number of small sandy beaches being washed away.