The spacecraft around Mars are getting ready for a spectacular show next weekend as comet Siding Spring flies past the red planet at a distance of just 138,000 kilometres. That’s less than half the distance between Earth and the Moon, and ten times closer than any known comet-fly by of our planet.

The event on Sunday 19th October will be a rare chance for the orbiters studying Mars to get a good shot of a real-life comet in action around our solar system.

To add to the interest, Siding Spring is what’s known as an Oort Cloud comet, and it is on its first-ever trip into our inner solar system. That’s important, because all the other comets we have had close encounters with are what are known as periodic comets, that’s to say they have an orbital period of fewer than 200 years. Siding Spring has an orbital period of several million years.

As this is its first time this close to the Sun, it isn’t at all clear what will happen to Siding Spring. It could just fall apart, and leave everyone wondering what might have been. It could get dramatically brighter, or just fade away. You just never know with comets.
At the moment ESA’s Rosetta mission is rapidly rolling back the boundaries of comet knowledge as it flies alongside 67P/Churyumov–Gerasimenko, a periodic comet. It is cruising as close as 10 kilometres from the surface, and will aim to put a lander on the nucleus in November. 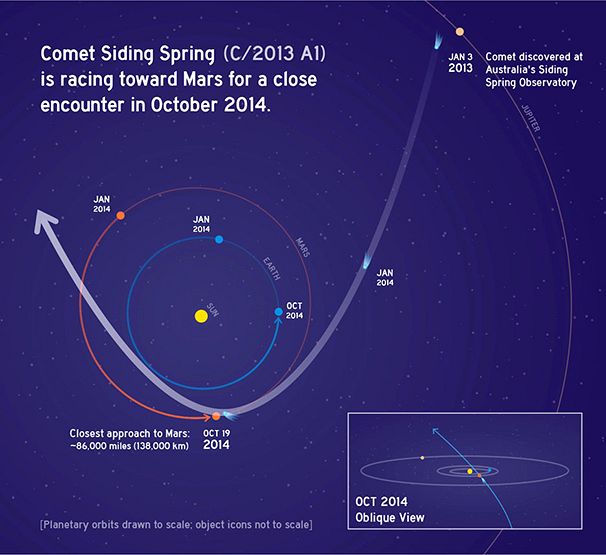 67P is as black as the blackest coal. So far all the other periodic comets seen have proven to be very, very dark too, and it will be interesting to see whether Siding Spring is the same. Scientists aren’t at all sure what it will look like – will it be like burnt toast, or will it be lighter, and icier on the surface?

One thing that is clear is that Siding Spring is relatively small – the latest estimates put it at 700 metres, compared to the 4km 67P comet chased by Rosetta – and it’s going fast, at a velocity relative to Mars of about 200,000 km/h.

What can the Mars spacecraft do?

Mars missions are designed to study Mars, not snap media-friendly JPGs of passing comets, but that hasn’t stopped the plucky science teams who run them taking advantage of this rare event to get some good old fashioned science data sent down to planet Earth.
There are five spacecraft at Mars today. ESA’s Mars Express, a battle hardened veteran of red planet observation, will be doing its best to get a good image of Siding Spring. NASA’s MAVEN spacecraft will try to see how the Martian atmosphere interacts with the comet’s gas tail.

One of the cameras on NASA’s Mars Reconnaissance Orbiter will try to get an image that shows the shape of the comet nucleus. The third American mission, Mars Odyssey, has adjusted its polar orbit slightly and by all accounts will be hiding the other side of the planet when Siding Spring sidles past.

The newest kid on the Martian block, India’s MOM spacecraft, will reportedly be ‘sniffing’ for methane from the comet, just as it seeks to sense the same gas in the Martian atmosphere. I wouldn’t rule out the Indians aiming for a front-page friendly photograph too.
For those little robots on the ground, Opportunity and Curiosity, the comet will be a tricky character to spot in the sky, primarily because its closest approach happens during the Martian daytime. Their instruments weren’t designed for imaging comets, either. But there’s still a long shot that one of them may be able to see the comet before sunrise or after sunset.

When Siding Spring was first spotted by Scottish-Australian astronomer Robert McNaught it was thought the comet may actually hit Mars, probably changing the red planet’s atmosphere forever. After more study that possibility was ruled out, but there was much talk of the risks of particles from the comet tail slamming into spacecraft and short circuiting instruments.

Many calculations were done, committees were consulted, and great minds pondered, and the current answer to the risk question is ‘No, not really’.

‘Not really’ in the sense that you can’t second guess a comet – as one expert once quipped, ‘comets are like cats, they have tails and they do what they like’. So, you can never be 100% sure, but according to the best calculations on trajectory etc., there is a 1-in-300,000 chance of being hit, according to ESA’s Mars Express blog.

This video in the player above shows how Siding Spring’s trajectory passes through the orbit of Mars.