Spain’s new king, Felipe VI, was officially sworn in at a ceremony in front of parliament in Madrid on Thursday.

With his wife, Queen Letizia, and his two daughters at his side, the 46-year-old pledged to unify the country and work with its political leaders.

“As I carry out my duties you will find in me a loyal head of state, willing to listen, to understand, to warn and to advise. I will also be someone who always defends our general interests,” he said.

The former Olympic yachtsman also paid tribute to his father Juan Carlos who officially abdicated at midnight. He said his father’s reign had been “exceptional” and he felt great “gratitude and respect” towards him

In an earlier ceremony to show the transfer of power, Juan Carlos symbolically took off his red sash, signifying his role as head of Spain’s military, and put it around his son’s waist.

Spain’s royal family will now hope a new king can lift their popularity and mark a fresh start after a number of scandals. 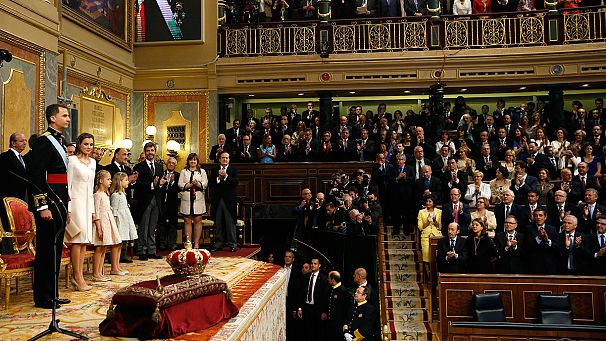