On June 6, 1944, around 160,000 Allied troops crossed the English Channel and stormed the beaches of Normandy.

German soldiers, tricked into expecting an attack on Calais, woke up to find the sea filled from horizon to horizon with ships – nearly 7,000 along 50 miles of Normandy coastline.

The invasion had been planned for the day before but a storm forced a delay.

Overnight, planes had dropped thousands of American and British paratroopers behind German lines. They began to blow up bridges and block roads to prevent a German counterattack on the beaches.

The beaches were divided into five sections and given the codenames Utah, Omaha, Gold, Juno and Sword. The British took command of Gold and Sword, while US forces oversaw Utah and Omaha and Canada oversaw Juno.

Once the beaches were secure, troops began to push inland. 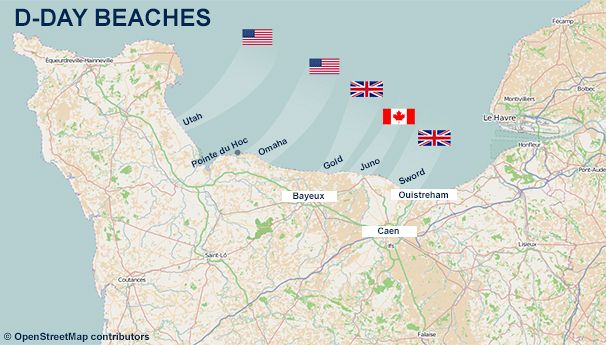 On D-Day alone, up to 3,000 Allied troops died with some 9,000 wounded or missing. German casualties, including the dead and wounded, are unknown but estimated at between 4,000 and 9,000.

By the end of August the allies had taken Paris back from the occupying Nazis.

On May 7, 1945, less than twelve months after the world’s largest seaborne invasion was launched, Germany surrendered to the allies, bringing an end to the European conflict in World War II.

euronews streaming LIVE: Coverage of memorial events for the 70th anniversary of D-Day