Belbek airbase was the scene of a tense standoff in Crimea on Tuesday morning.

Around 200 unarmed Ukrainian soldiers confronted troops believed to be Russian, but with no identifying insignia, who were restricting access to the compound.

The armed troops warn them not to come closer or they will shoot.

The Ukrainian officer calls for calm whilst the armed troops respond saying it is a provocation.

He replies that the Ukrainians are unarmed and wish to enter the base to do their jobs.

After strained negotiations the two groups decided on a joint patrol of the area.

With many Ukrainian troops stationed inside the barracks, wives and relatives waited anxiously outside for news.

Adding to the surreal atmosphere, some Ukrainians began to play football under the watchful eyes of the occupying force, before heading to barracks a few kilometres away. 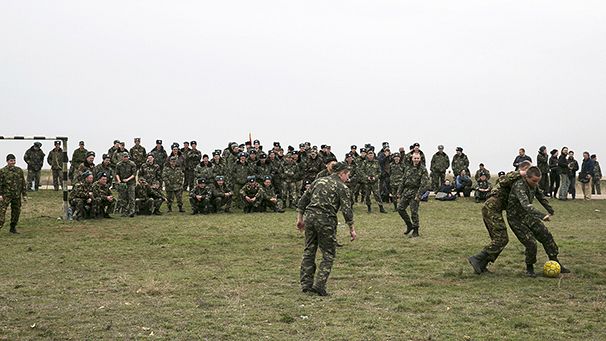 Meanwhile, Ukrainians stationed inside the airbase continue to hold their ground.

‘‘Of course my mum is scared and crying and asking me to stay safe,” said Ukrainian airforce radio electrician Captain Siomko Nikolai. “But at the same time she told me: you took an oath and you need to keep it until the end.”

Captain Severin Vetvitsky, Ukrainian engineer airman said the orders they received were not clear as they are not sure what to do but added one thing is clear, “(our commanders) tell us not to give up. We are not surrendering.”

Ukraine has accused the Kremlin of deploying 16,000 troops outside bases in Crimea, which would be an infraction of an agreement governing Russia’s Black Sea fleet.

Moscow denies it has sent soldiers to the region.