They were killed at the Pedrinhas Prison Complex in Maranhão state on the 17th of December. Others have also urged the authorities to restore order and ensure the inmates’ safety. Maranhão state military police then took control — of five other prisons as well.

Amnesty International says there have been 169 Maranhão inmate murders since 2007.

Amnesty advisor Alexandre Ciconello said: “Maranhão is a serious example, but you have precarious overcrowding and rebellions in all states, and a system that does not rehabilitate the people imprisoned. There are 548,000 people inside, and the system can only handle a little more than half that. It means the penitentiary system is 229,000 places short.”

The United Nations has also called on Brazil to investigate the Pedrinhas murders and take action against the killers.

Against a backdrop of corpses hung from prison rooftops, the state governor has denied that reform efforts have been insufficient. She called a report from a judge ‘full of lies’ after the inspector said that even visiting wives are often raped by inmates of rival gangs.

In a system ridden with corruption, sociologist Anderson Silva was pessimistic about Brazilians in positions of responsibility, saying: “The international outcry is up against a lot of cynicism in this case. People say the same things over and over in the media, but nothing’s going to be done to change or control the criminal justice system. Brazil doesn’t have the death penalty, the state puts people in prison, it therefore is responsible for everyone in there, with the obligation to keep them alive.”

Critics point out that Brazil’s prison crisis is a horror in stark contrast to its international prestige as an emerging global power.

The Justice Ministry has announced it will spend more than 40 million euros on reforms – where cells built for three dozen people are packed with ten times that many, where inmates must wait days between washes, and where lives are taken with impunity. 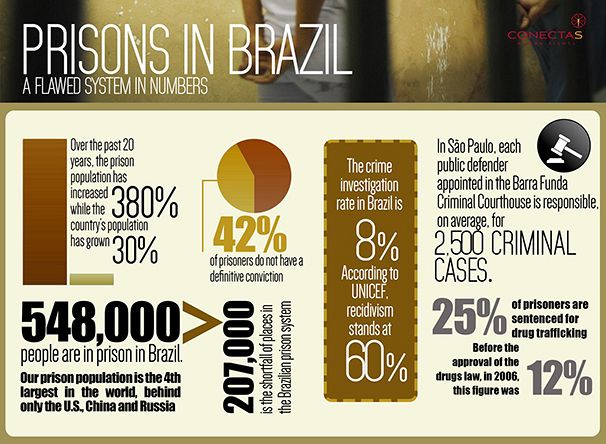