Russia has repeated that no American threat would force it to hand over US whistleblower Edward Snowden.

The head of the Foreign Affairs Commission in the Duma (the Russian parliament’s lower house), Alexeï Pouchkov, wrote on Twitter that the US intelligence leaker and Wikileaks founder Julian Assange were the “new dissidents”.

A source in Moscow has been quoted by the Interfax news agency as saying the fugitive may still be in the transit area of the city’s airport because he has no valid travel papers.

President Putin has said the whistleblower is free to leave and has dismissed US criticism as “ravings and rubbish”.

Washington is keeping up the pressure on Moscow.

“There is no extradition treaty (between the US and Russia), but there are standards of behaviour between sovereign nations. We would simply call on our friends in Russia to respect the fact that a partner nation, a co-member of the permanent five of the United Nations, has made a normal request under legal systems, for law to be upheld,” said US Secretary of State John Kerry.

Ecuador also says it has received a message from Washington about Snowden’s request, without specifying its content.

One analyst in the Ecuadorean capital believes there would be negative consequences for the country if it allowed Snowden in.

“Surely the United States will establish some sort of control and maybe some sort of economic sanctions. I am certain that the Ecuadorean government has studied and considered this,” said Professor Patricia de la Torre of the Catholic University of Ecuador.

Venezuela has added that it might study any similar request.

The Snowden affair seen by our cartoonist Etienne Barthomeuf 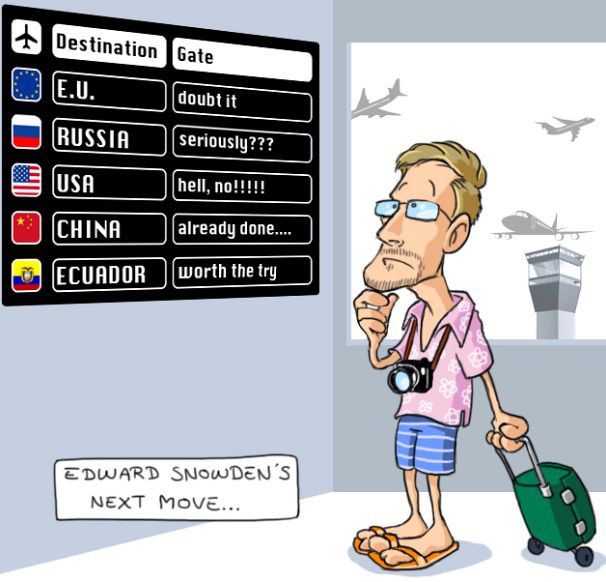