The European Commission voted on Tuesday in Brussels to end roaming fees for calls, texts and internet in favour of a single telecoms market across the continent.

Concrete details will be agreed upon and published within the next six weeks and the proposals could come into effect as soon as July 1, 2014.

The idea behind the reforms is to encourage a consolidation of European mobile network operators with greater eventual investment in the face of rapid growth in internet traffic.

Neelie Kroes, the European Commissioner for Digital Agenda who is pushing for the changes, said: “I am glad that basic internet is now virtually everywhere in the EU, but we can’t get stuck playing yesterday’s game. The data shows that the biggest problem this year is the lack of investment in very fast networks, and a continuing lack of a real telecoms single market. The problem is clear and our response via a single telecoms market package will be too.”

In a speech last month she said of the reforms: “It’s how we can tell the world that Europe does “get” digital, it is how we can show voters that the EU does listen. Telecoms touches everything – and users are developing massive expectations of it.”

However, telecoms bosses believe their industry is being unfairly targeted, although commissioners argue that operators will gain in the long term as more customers use their phones, and particularly the internet, whilst abroad.

With roaming fees scrapped, officials believe the single market will allow foreign operators to compete for other countries’ customers. This could lead to alliances and mergers, similar to those seen in the airline industry.

Roaming tariffs in the EU have been an important project for the European Commission over the past few years. The cost of making and receiving calls, sending texts and using mobile internet have all decreased since 2007, when excessive charges were originally tackled.

The graph below shows how roaming tariffs have decreased. 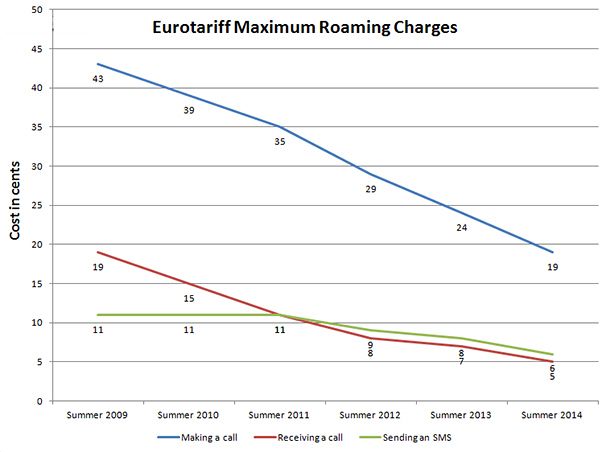