Nearly half of all flights from France’s main airports were cancelled on Tuesday due to a walk-out by air traffic controllers.

Parisian airports have warned of major delays as the three-day strike began on Tuesday.

The controllers are protesting against the liberalisation of airspace under the Single European Sky project.

Speaking on Tuesday the EU Transport Commissioner asked for the plan to be sped up. The Commission claims that airspace inefficiencies cost airlines and passengers five billion euros per year. But the strike is also hitting wallets.

One passenger complained: “I came here at five in the morning and I paid 50 euros for a taxi and only when I came here they told me the flight was cancelled. So I had to buy another ticket.”

Stranded passengers could become a familiar sight over the next few days in EU airports with the strikes are expected to spread to the rest of the European Union.

Eurocontrol map displaying the delayed flights at 12:30pm GMT. Delays over 45 minutes are shown in red. 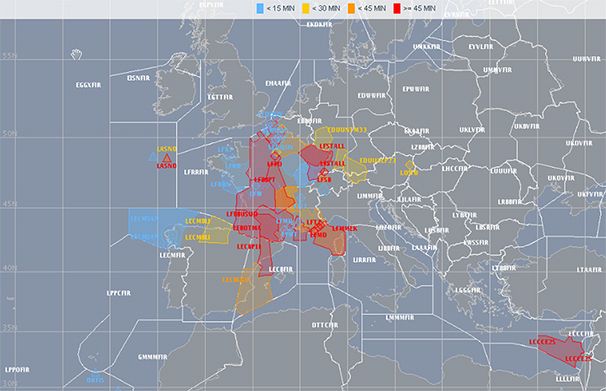