There is no end in sight to the economic misery for the eurozone.

The region has slumped into its longest recession since records began in 1995.

Between January and March, gross domestic product fell for the sixth quarter in a row.

That comes amid widespread austerity measures as governments cut back spending and raise taxes to reduce their deficits, companies lay off staff and Europeans buy less.

GDP in the 17 countries using the euro shrank by 0.2 percent. That was an improvement on the 0.6 percent drop recorded between October and December last year, but still a one percent annual contraction.

However the former head of the European Central Bank is upbeat. He told euronews: “Though the situation is difficult, I think we are relatively close to a time when confidence is returning, but what is growth [based on]? It’s consumer confidence, investor confidence, trust, obviously and that is fundamental for investors. That is what will lead to trust really being restored.”

Germany – which generates almost a third of the eurozone’s economic output – grew by a weaker than expected 0.1 percent.

The bloc’s recession is now longer than the five quarters of contraction that followed the global financial crisis in 2008/2009, although it is not as deep.

But the human cost is huge. Record unemployment – over 12 percent of the workforce region wide, more than one in four workers jobless in places like Greece and Spain, and over half of all young people in those countries.

All of this challenges the European Central Bank’s view that the economy will start to recover this year and it fuels the debate about how to balance the need to cut debt with measures to foster growth.

The country’s economy minister Pierre Moscovici said this was “not a surprise” and that it was “largely due to the eurozone environment.”

French president François Hollande said the situation was “serious” but not as bad as the previous recession in 2008-2009. He also pointed the finger at a fall in demand for French products in Europe. 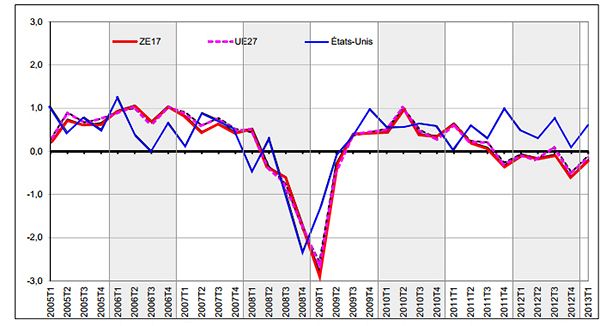