A volcano has erupted in the Philippines, killing five people from a tour group climbing the mountain. Four of the victims are said to be German, the fifth is a Filipino guide.

Seven others were injured when Mount Mayon, one of the most active volcanoes in the country, sent a cloud of ash and rocks hundreds of metres into the sky in an eruption that lasted just over a minute.

The authorities say 27 hikers were on the volcano at the time. One said it suddenly started “raining rocks, like in hell”. A local guide later described how the victims were killed or hurt by rocks that fell from the ash cloud.

The level of alert has not been raised as the volcano’s activity has not intensified.

Although the surrounding area has been covered in ash there are no plans to evacuate nearby houses.

The Philippines Institute of Vulcanology and Seismology said in a statement that a small “phreatic event”, lasting 73 seconds, sent ash 500 metres into the air.

Mount Mayon has erupted nearly 50 times since records began 400 years ago. In December 2009, tens of thousands of residents left their homes when the volcano began spouting ash and lava. The most deadly eruption on record occurred in 1814, when more than one thousand people were killed. 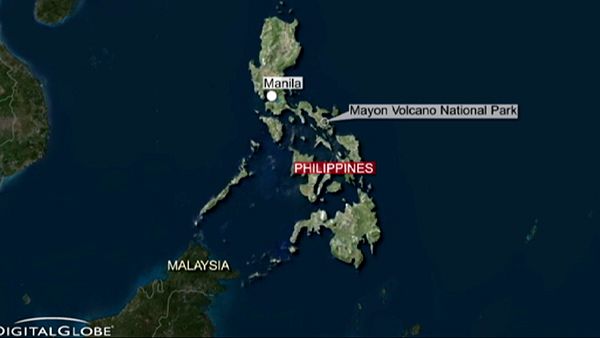